The Spanish Flu: A Footnote to WWI

I've been reading Laura Spinney's Pale Rider:The Spanish Flu of 1918 and How It Changed the World. In the introduction, the author notes that the influenza outbreak is often treated as "a footnote to World War I", meaning that while the centenary of the war held our attention from 2014-2018, there has been little to no centenary recognition of the chaos, disruption, and death caused by the Spanish Flu, the deadliest pandemic in human history.

The infection known as the Spanish Influenza of 1918 actually occurred in four distinct waves between spring, 1918 and the early months of 1920, with its most virulent occurrence being from late summer through the fall of 1918. After its initial, somewhat benign appearance in the spring, the disease mutated into something highly contagious and lethal. It was this strain that soldiers of all nations carried home in the last months of 1918. All together, the flu affected about 500,000,000 people, one-third of the world's population. Estimates of deaths range from 50-100 million people. (The wide variance is due to inaccurate diagnoses and poor recording keeping.) In contrast, World War I took about 20,000,000 lives: 9.7 million military personnel and about 10,000,000 civilians.

The Spanish Flu did not begin in Spain (where it was called the French Flu). The name apparently relates to Spain's ability to remain a neutral country during the war. Because of that, Spanish newspapers weren't censored as in combatant countries, where governments feared that news of an epidemic would undermine both military and civilian moral, and so they suppressed reports of the growing contagion and deaths. Spain's newspapers, however, reported on spread of the disease (one of the survivors being the king), making it seem to be a singularly Spanish catastrophe.

The Spanish flu attacked a victim's respiratory system. The tell-tale sign that death was almost certain was the blue-black discoloration of the victim's face and extremities due to slow suffocation as the lungs filled with fluid. Those in the 15-44 age range succumbed in greater proportion than did the elderly, infants or children.

We now know the Spanish Flu was an air-borne virus, spread primarily through coughs, sneezes, and spittle. In 1918 there was no such thing as a flu vaccine, and no known cure. The only fairly reliable preventative was to bring fresh air into homes and offices, and stay out of crowded places. The only help for the victim was to try to keep her hydrated, comfortable, and isolated.

The highly contagious nature of the Spanish Flu led government authorities around the world to restrict public gatherings, such as theatre performances and even church attendance. Most schools, however, remained in session, authorities recognizing that children seemed less likely to contract the disease, and were probably safer in school than at home.

If you search "Spanish Flu" in the Zanesville Times Recorder between 1918-1920, you will find an abundance of news items. There are official notices forbidding public gatherings, and updates on the epidemic's toll (above). There are reports of individuals or whole communities taken ill: Mrs. Iola Squires of White Cottage "who has been spending the winter at Detroit, Mich. with her son Allen, has been ill with pneumonia* and Spanish influenza." (January 30, 1919, p. 4); "Twenty-five cases of Spanish influenza which developed within the past three days were reported at Road Forks, near Harrietsville, late Friday afternoon....The patients are under care of Dr. Hill" (January 31, 1920, p. 7). There are dozens of advertisements for so-called preventatives and cures
(below), and even for insurance policies (left). 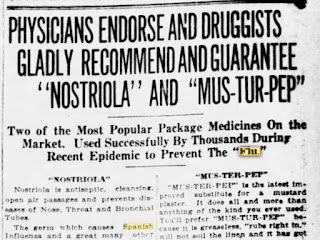 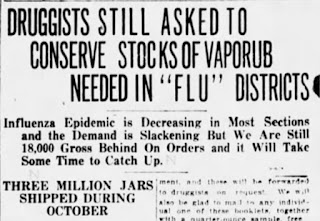 In addition to the book that got me started on the topic of the Spanish Flu of 1918, there are a number of others. Of course the internet is loaded with information and photographs. I read once that if you had people in your family who died in 1918 (especially in the autumn of that year), there's a good possibility they were one of the millions of victims of the world's deadliest pandemic. Even if you didn't have any victims in your family, you can be sure your ancestors were touched in some way by the influenza.

Recommended:
Laura Spinney, Pale Rider:The Spanish Flu of 1918 and How It Changed the World , Public Affairs, 2017.
John M. Barry, The Great Influenza: The Story of the Deadliest Pandemic in History, Penquin Books, 2005.
Gina Kolata, Flu: The Story of the Great Influenza Pandemic of 1918 and the Search for the Virus That Caused It, Farrar, Straus, and Giroux, 2011.
History Today: The Spanish Flu Pandemic
History: The Spanish Flu
National Geographic: Mystery of 1918 Flu...Solved?
The Atlantic: The 1918 Flu Pandemic--Photos From a Century Ago

*Pneumonia frequently accompanied the flu--as it does today--and some survived the flu only to die of pneumonia.