The Licking River feeds into the Muskingum River at Zanesville, Ohio, and like most rivers, it will flood at least once a year, usually in the spring. But there were times in history when the river produced large-scale floods that could be destructive to life and property, especially when the flood waters reached a heavily populated area.

At least twice in the 20th century, in 1913 and 1937, the Licking River brought devastating floods to the city of Zanesville. Throughout human history, the solution to minimizing flood damage has been to build a dam to control the waters. The Dillon reservoir and dam, authorized under the federal Flood Control Act of 1938, was part of a network of reservoirs throughout the Muskingum Valley meant to provide flood control for the Ohio River Basin, but Dillon’s primary purpose was to reduce the threat of serious flooding of a major city.
What seemed good for Zanesville and points south, however, was literally devastating to those whose homes and livelihoods were within the construction zone; their needs were deemed insignificant in the face of what officials perceived to be the  greater need. The reality is that in a face-off between a David and a Goliath, David usually gets trampled. In the case of the construction of Dillon Dam, Irville, Nashport, and Pleasant Valley, tragically, didn’t have a chance.

Eight years after the passage of the flood control legislation—in 1946—the Dillon Dam project got underway, with the relocation of 19 miles of Baltimore and Ohio Railroad track. Funding problems and the Korean War halted work. In the mid-1950’s, the Zanesville, McConnelsville, and Marietta Chambers of Commerce, in conjunction with the U.S. Army Corps of Engineers, launched a campaign to push construction with headlines such as: “After 40 years—Ohio’s Licking River still threatens rich Muskingum Valley”.  In August, 1956, President Eisenhower authorized the funds needed to resume work, and the project went forward to its completion in 1960.

Dillon Dam cost the federal government $33,000,000; it cost the 700 inhabitants of three hamlets along the Licking River—Irville, Nashport, and Pleasant Valley—their homes, their communities, and for many, their generational roots. The 10,000 acres required by the Dillon Dam project encompassed these tiny communities; the people who lived in them were forced to abandon or move their homes, stores, churches, schools, and even their cemeteries. Although several families relocated in an area called “new” Nashport, the sense of community once found in these places could never be fully replicated.

Irville was founded in 1814, along the stage coach route between Columbus and Zanesville. It was granted a post office in 1816. There was a tavern to serve travelers, two churches, a couple of stores, a medical services provider, a brick manufacturer, and two fraternal lodges.

Nashport, west of Irville, was laid out in 1827 and became a tiny but thriving waystation on the Ohio Canal. In addition to providing accommodations for travelers and warehouses for goods being transported on the canal, Nashport had two general stores, a mill, two blacksmith shops, and several churches. There were two fruit orchard businesses. In the latter part of the 19th-early 20th century, Nashport was a stop on the Inter-Urban Railroad that ran along the Licking River between Newark and Zanesville.

Pleasant Valley, which was granted its own post office in 1855, consisted primarily of large family farms, but still boasted, in addition to a post office, a general store, a blacksmith shop, a pottery manufacturer, a grist mill, and a saw mill. 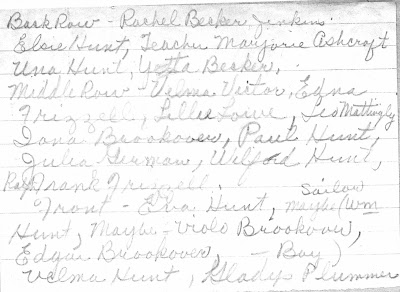 Sixty years have passed since the inhabitants of these communities were dispersed and their buildings removed or demolished. These places are gone completely. For those who once lived in these communities, and for their descendants, memories—and some photos—are all that remain. Before long, all memory of these places will have vanished as completely as the physical structures.

MCCOGS’ mission is to preserve family history. Place is critical to that history, and so members of MCCOGS have been gathering photos and conducting interviews during the past several months. These memories are being compiled into a book, Before Dillon: Memories of the Lost Villages of Irville, Nashport, and Pleasant Valley. We hope to have this book available for purchase by the end of this year.