Thanksgiving Day is much-loved day celebrated by all kinds, colors, and creeds of Americans. Thanksgiving is the day we enjoy--and give thanks--for the opportunity to share a giant meal with family and friends. And for many of us, Thanksgiving means there will be price-slashing sales on just about everything, both before and after the celebratory day. This has been true for at least 100 years, as these Zanesville Times Recorder advertisements from the first half of the 20th century show. 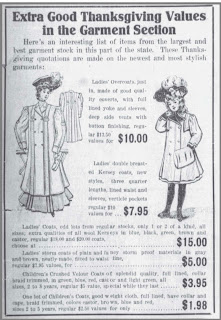 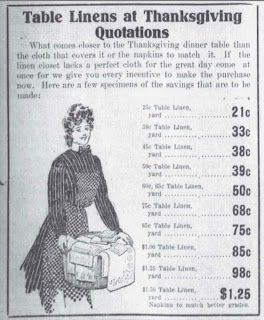 The above ad and the three following appeared in the November 21, 1910 edition of the Times Recorder, three days before Thanksgiving. The Bailey Drug company was a family-owned business that had been around since 1836. William H. Slack began as a meat wholesaler around 1880. His success allowed him to invest in real estate in downtown Zanesville. He owned a building at Sixth and Main, and the Sharpe Building on Fifth. His retail market might have been located in one of those buildings. George Harvey Geist's shoe store was located at Seventh and Main. He later took over the Zane Shoe Co., which manufactured children's shoes. In 1925, Geist was robbed and murdered while working at his office. I could not find any information about the "Pure Food" store. 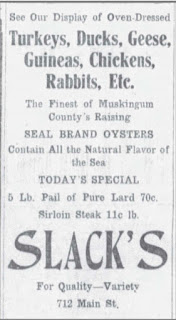 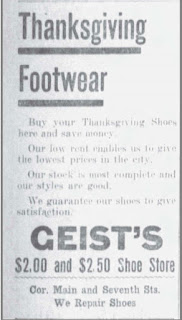 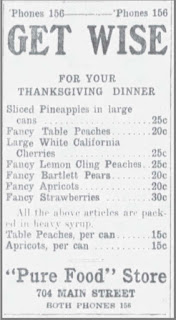 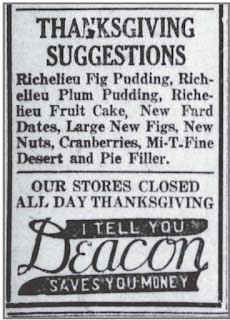 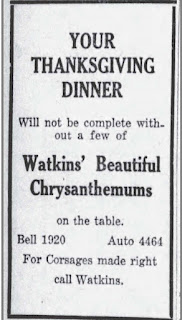 The above and the following ads appeared in the Times Recorder on November 26, 1930, the day before Thanksgiving. W. R. Baker founded the company in 1885. It was owned and operated by four generations before being purchased by Nickles' Bakery in 1970. The bakery's bread was marketed throughout southeastern and central Ohio under the names Plezol, Butternut, and Miami Made. A J. W. Knapp operated the Shaw Furnishing and Carpet Co. in Zanesville in 1918. He might have established the business in the ad below. 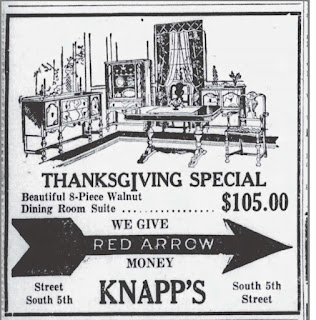 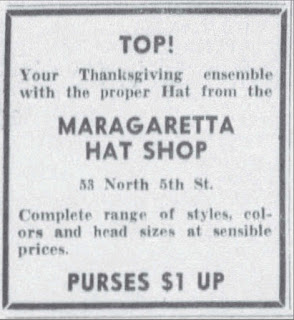 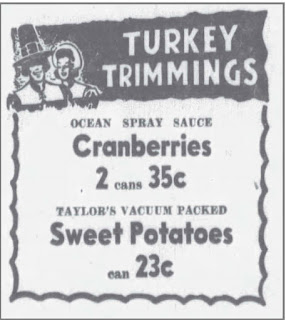 Posted by MacGhille-Eoin (McLean) at 5:53 PM