Once upon a time, Santa Claus wrote letters to children. Actually, it was parents, posing as Santa, who wrote the letters, admonishing their children for misbehaving, and recommending areas for improvement--or else! Santa was a strict disciplinarian in those days, not the jolly fellow we know now. In early 19th century illustrations, he usually carried a birch rod, and, not surprisingly, any children pictured nearby were crying.

Around the mid-19th century, Santa stopped sending letters, and instead began receiving letters from children. The history of letters to Santa doesn't explain why this change occurred, but it coincided with the advent of direct mail delivery to homes in urban areas, mailboxes, and a drop in postage costs. Children were probably relieved to have the opportunity to tell Santa their version of the behavior issue, as well as to put in a request for that special gift on Christmas Day.

For years, the postal service directed letters to Santa to the Dead Letter Office. Some charitable organizations sought permission to respond to the letters, but the requests were denied, since opening mail to another individual, even a mythical one, is against the law. In 1913, the Postmaster General made an exception to that law, and charitable organizations took on the task of reading the letters, and seeing that some wishes came true. This practice continues, but today, organizations can only access letters addressed explicitly to "Santa Claus", not "Kris Kringle", "St. Nicholas", or any other variant which could result in mail to families surnamed "Nicholas" or "Kringle" being misdirected.

Around the turn of the 20th century, children were encouraged to send their Santa letters to the local newspaper for publication. Newspapers even offered prizes for the best letter. If you have a subscription to Newspapers.com or Ancestry.com, you can access Zanesville newspapers. Search by December dates, and you'll find dozens and dozens of short letters to Santa from Muskingum County children. To my delight, I stumbled on some letters written by Daisy and Charles Melick, my great-aunt Xema (Armstrong) Melick's children. 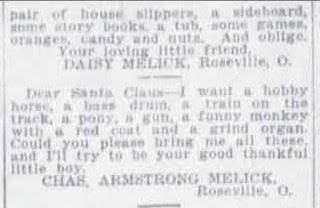